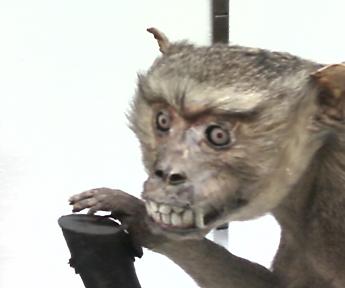 For the next two weeks, I’ll be cheating on Shovelware, blogging about my recent Grand Tour of Uncanny Italy at Boing Boing, the self-described “directory of wonderful things” and the Web’s fifth most popular blog, at least as of today’s Technorati rankings. I’ll be posting about a Few of My Favorite Things: Cream colored ponies and crisp apple strudels, cyclopean fetuses floating in jars and wax models of conjoined twins and spectacularly inept taxidermy—stuffed animals leaking sawdust, their brittle hides spiderwebbed with cracks, their glass eyes cloudy with age—and incorruptible saints and unfrequented reliquaries and the sublimated eroticism of religious kitsch. That sort of thing.