On January 13, the world learned that England’s irrepressible Prince Harry had pulled another madcap stunt: attending a costume party for A-listers dressed in Desert Fox drag (the Afrika Korps uniform worn by Field Marshal Erwin Rommel, topped off with a swastika armband). 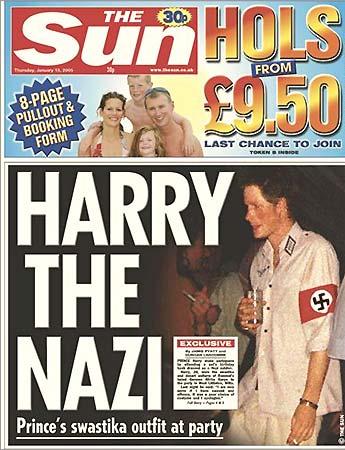 The vultures of Fleet Street descended in the usual Hitchcockian frenzy. A flurry of buzzwords, the raucous cawing of columnists fighting over the juiciest morsel, and then they were gone, leaving nothing but a bloody tuft of carrottop and another damage-control migraine for the royals…

Now that the gregarious carrion-feeders have fled, The Department of Hitler Studies (chairman emeritus: Jack Gladney) wonders about the deeper meanings of this whole foofaraw. (Or is it a kerfuffle? Who the hell knows?) To begin, who hacked the hakenkreuz on Harry’s armband? Did the costume manufacturer attempt to inoculate the wearer against public outrage by defanging the infamous icon—shortening the bent part of the cross’s arms? (Hitler’s eye for graphic design insisted on longer, more symmetrical arms.)

Failed postcard-painter, architect of megabuildings never to be built, Hitler deserves his due, however much it pains us, as an intuitive master of what marketing professor Douglas B. Holt calls “cultural branding.” In Mein Kampf, the leader of Team Nazi recalls his struggle to build the perfect logo:

I myself, meanwhile, after innumerable attempts, had laid down a final form: a flag with a red background, a white disk, and a black swastika in the middle. After long trials, I also found a definite proportion between the size of the flag and the size of the white disk, as well as the shape and thickness of the swastika.

As the design critic Rick Poynor told us, in an e-mail interview for a Vogue Hommes essay we were writing, “This material engages us not only because of what it represents to the popular mind—the specter of absolute evil—but because it does so with a stylish command of imagery that has never been surpassed. The devil has the best tunes and the Nazis have the best uniforms, insignia and banners, and a ‘logo,’ the swastika, of incomparable power. (No wonder books on corporate identity can never resist including it; next thing you know, they’ll be calling it a ‘brand.’)”

Sontag reflects on the power of Nazi style, in “Fascinating Fascism,” meditating on the SS uniform’s reincarnation as the formal attire of S/M devotees with a weakness for the louche:

[P]hotographs of SS uniforms are the units of a particularly powerful and widespread sexual fantasy. Why the SS? Because the SS was the ideal incarnation of fascism’s overt assertion of the righteousness of violence, the right to have total power over others and to treat them as absolutely inferior. It was in the SS that this assertion seemed most complete, because they acted it out in a singularly brutal and efficient manner; and because they dramatized it by linking themselves to certain aesthetic standards. The SS was designed as an elite military community that would be not only supremely violent but also supremely beautiful. […] SS uniforms were stylish, well-cut, with a touch (but not too much) of eccentricity. Compare the rather boring and not very well cut American army uniform: jacket, shirt, tie, pants, socks, and lace-up shoes—essentially civilian clothes no matter how bedecked with medals and badges.

Hitler lived before the Triumph of the Shill, when branding and marketing have infiltrated everything from business to politics to the presentation of self, in the turbo-capitalist West. But if he had survived, we could easily imagine him at home in a cultural climate where anxious middle-managers consult, in all seriousness, books such as A New Brand World: 8 Principles for Achieving Brand Leadership in the 21st Century by Scott Bedbury or the ominously titled Culting of Brands: When Customers Become True Believers by Douglas Atkin, or the suitably dictatorial Power of Cult Branding: How 9 Magnetic Brands Turned Customers Into Loyal Followers by Matthew W. Ragas, or How Brands Become Icons: The Principles of Cultural Branding by Douglas B. Holt. (No mention of the swastika in Holt’s book, although he does tell us that “Coke celebrated America’s triumphs against Nazi Germany in World War II,” and that Volkswagen had a persistent image problem due to its origins as the German “people’s car,” developed by Hitler.)

Warning: Attention-Conservation Alert! Digression ahead. If you’re engaging in workplace time-theft, skip down to “Deep breath…”

Hitler’s demonic talent for graphic branding reminds us of Uncle Walt, the mediocre cartoonist and self-described benign dictator of the Happiest Place on Earth, whose iconic mouse ears and branded signature (not his own; the company designed it, and he learned to forge it) are as instantly recognizable as the swastika (and, in some quarters, nearly as feared). We think of the Great Dictator’s childish delight in Disney cartoons and his unsettling habit of whistling “Who’s Afraid of the Big, Bad Wolf”? (Hitler nicknamed himself “Wolf”) as he dragged his game leg through the corridors of the Fuhrerbunker, a cadaverous apparition sustained by drugs, while the Russian tanks rolled overhead. We think, too, of both men’s iconic moustaches, and of the persistent rumors that They Saved Hitler’s Brain and They Froze Walt’s Body. 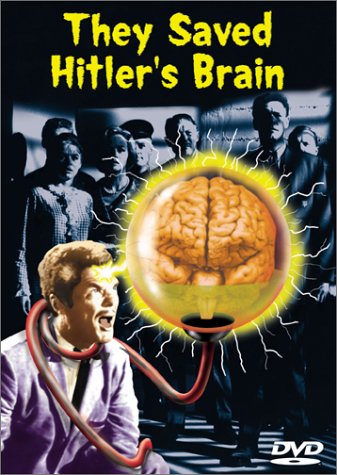 We think of Disney’s collaboration with recovering Nazi scientist Werner von Braun on TV shows and Tomorrowland. Less glibly, and far more damningly, we think of the noxious anti-Semitism tactfully omitted from Walt’s official biography (but helpfully included in Disney’s World by Leonard Mosely): “It’s the century of the Jew, the union cutthroat, the fag, and the whore!,” the Magic Kingdom’s Fuhrer once spluttered, in one of his less avuncular moments. “And FDR and his National Labor Relations Board made it so!” Then, too, there’s Disney’s unbecoming fondness for National Socialism: According to Walt Disney: Hollywood’s Dark Prince by Marc Elliot, Everybody’s Favorite Mausketeer attended American Nazi Party rallies and visited Mussolini at his private villa. And then we think of Dr. Hibbert’s observation, in the Simpsons episode “The Boy Who Knew Too Much,” that Hitler, Walt Disney, and Freddy Quimby all had the “evil gene.” And then we wonder about Alien Jesus Command’s suggestion that Disney imagineers re-imagineer the recently excavated Fuhrerbunker, in Berlin, into a new EuroDisney attraction. And then we find ourselves scanning “Some Signs You are a Disney Nazi” (“Unwavering devotion to all things Disney.” “Disbelief of anything anti-Disney.” “Obsession with Disney memorabelia.” [sic] And “Obedient faith in every Disney employee.”) at the “Disney, Hoover and Reno” page, a Henry Darger-approved exercise in crackpot hermeneutics that in pre-Web times would have been scrawled in Magic Marker and stapled to telephone poles.

At this point, we realize that while a frenzy of intertextuality is the mother of deconstruction (or something like that), it is also the first step down the slippery slope that leads to conspiracy theory. We should heed the warning of Casaubon, the demented exegete in Foucault’s Pendulum by Umberto Eco (no slouch himself, when it comes to far-flung connections): “[W]anting connections, we found connections—always, everywhere, and between everything. The world exploded in a whirling network of kinships, where everything pointed to everything else, everything explained everything else….” 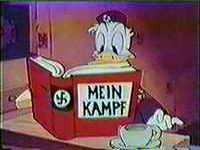 Deep breath. Where were we, before we went off on that discursive tear about Hitler and Disneyland’s Dark Prince? Oh, yeah: Prince Harry, and his unfortunate choice of the swastika as fashion accessory.

While we at the Department of Hitler Studies can understand the moral recoil from Prince Harry’s yobbish insensitivity, we cannot fathom the shock expressed, in some quarters. Isn’t the little Anus Horribilis‘s act of monumental insensitivity part and parcel of the royals’ highborn disdain for the simple folk? What’s the point of being heir to the throne if you’re bound by the moral code (not to mention the tax code) that constrains the lesser ethers? Doesn’t the appalling theme of the party Our Harry was attending—”Colonials and Natives,” which might’ve seemed a waggish choice if you were sipping gin rickeys after shooting an elephant in Victorian India, but if not, not—speak volumes about the colonial consciousness of all of the realm’s bluebloods? As the editors of the London News Review wrote in their tongue-in-cheek “Defense of the Idiot Prince,” “‘Colonials and Natives’? What the fuck are these people on? What century are they living in? Colonials and Natives? It beggars belief. Why not ‘Imperialists and Nig Nogs’?” Then, too, it’s common knowledge that a genteel anti-Semitism has long been part of the aristocratic gene code, in England. Ugly? Obviously. Unconscionable? No doubt. Uncommon? Hardly.

Jessica (“Decca”) Mitford, an English blueblood, once referred to “the deep dyed anti-Semitism that pervades all England.” She knew whereof she spake: Her sister Diana married Sir Oswald Mosely, the blackshirted Adolf wannabe behind the British Union of Fascists, in a secret ceremony in Goebbels’s apartment, with Hitler in attendance. To the end of her days, Diana remained a swastika girl at heart. In The Sisters: The Saga of the Mitford Family, Mary S. Lovell quotes Diana’s remarks to a BBC interviewer in 1989. Hitler, she gushed, was “extraordinarily fascinating and clever. Naturally. You don’t get to be where he was just by being the kind of person people like to think he was…” (Of course, those bullnecked SA bootboys, whose brass knuckles left beerhall hecklers softmouthed, might have helped Clever Adolf along the road to power, but who are we to be critical?) Dina’s charming sister Unity—whose middle name was “Valkyrie” and who was conceived in Swastika, Ontario (I’m not making this up)—was an enthusiastic Nazi, too. She thought it hilarious when the Nazi governor of Franconia, the virulent ant-Semite Julius Streicher, forced a group of Jews to mow a meadow—with their teeth. (Again, our source is Lovell’s The Sisters.)

Like Mosely, the Mitfords were members of the privileged class, of which Prince Harry is the very flower. As The Guardian points out, “King Edward VIII, Harry’s great-great uncle, was a Nazi sympathizer, while Princess Michael of Kent’s father was a Nazi party member.” Of course, the English hold no copyright on anti-Semitism or fascist sympathies. Protocols of the Elders of Zion publisher and Hitler campaign contributor Henry Ford, Nazi sympathist Charles Lindberg, and American Nazi Party founder George Lincoln Rockwell—no relation to Norman—remind us that the United States has proven fertile loam for fascism’s blood-and-soil theology. Let he who is without sin cast the first swastika. Still, the English aristocracy’s coy games of footsie with fascism are surely relevant to any discussion of Prince Harry’s indiscretions.

Not that a history lesson is necessary. We are shocked—shocked!—to discover that the scion of a dynasty, whose right to rule rests on the assumption of genetic superiority, failed the sensitivity test in deciding whether or not to wear a Nazi uniform to a costume party. There’s a term for the world-view underlying all monarchies: Social Darwinism. Little wonder, then, that the purebred product of one of Western history’s best-known experiments in eugenics should feel a sense of kinship, however unconscious, with the people who brought you racial hygiene on an apocalyptic scale. The trouble with Harry, of course, is that he committed the unthinkable indiscretion of exposing in public the birthmark most manor-born ubermenschen keep hidden.

Tomorrow Belongs to Me

Prophesied to last a millennium, Adolf Hitler’s Thousand-Year Reich lasted only 12 years, from 1933 to 1945. Scripted to end—if it ever ended—in the melancholy grandeur of triumphal arches wreathed in ivy, its tawdry finale turned out to be a self-inflicted bullet in Der Fuhrer’s brain, as Soviet tanks rumbled into Berlin. The Third Reich’s […]