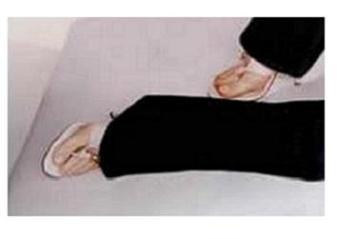 Is that an unnaturally well-hung big toe?

Or an ordinary digit, digitally inflated to Jeff Stryker proportions?

The big toe, specifically, has a venerable history as a penile surrogate or substitute nipple, from Lya Lys slurping rapturously on a statue’s toe in Luis Bunuel’s L’Age d’Or (1930) to Dr. Alex Comfort’s funny-creepy paeans in The Joy of Sex (1972)—”the pad of the male big toe applied to the clitoris or the vulva generally is a magnificent erotic instrument.” (The other shoe drops when one learns that the good doctor was missing four fingers on his left hand, blown off while playing with explosives as a kid. At ’70s swingers clubs such as Sandstone Retreat, he needed all the appendages he could muster. Thus self-serving advice such as: The “gentleman who is keeping six women occupied…using tongue, penis, both hands and both big toes [must] make sure the nail isn’t sharp.”)

In the Versace ad, part of a campaign debuting in women’s magazines this month, Madonna lazes on a daybed, nibbling a pen with slow-burning, bedroom-eyed sexiness. (Never has the phrase “pencil-licker” sounded so lubricious. Where’s that Truth or Dare Coke bottle when you need it?) But the picture’s composition guides our gaze from that suggestive pen, along the cord between her breasts, to the chain tossed across her crotch), and ultimately to that immaculately pale foot, with its weirdly prehensile toe.

Of all fetishes, podophilia has long been synonymous with clammy, bottom-feeder perversity. (Not that it’s the limit case in unacceptable obsessions: Necrophilia, coprophilia, or zoophilia ensure death by stoning or banishment to Jerry Springer’s green room, depending on which side of the Mason-Dixon line you live on.
Doubtless, the unspoken taboo on foot fondling, sucking, and (insert your worst nightmare here) has something to do with the skanky nature of the human foot, before the advent of the pedicure, the odor eater, and Dr. Scholl’s Fungal Nail Revitalizer. As the Surrealist philosopher Georges Bataille wrote, in his wonderfully over-the-top essay “Big Toe,”

The human foot is commonly subjected to grotesque tortures that deform it and make it rachitic. It is stupidly consecrated to corns, calluses, and bunions, and if one takes into account turns of phrase that are only now disappearing, to the most loathsome filthiness: the peasant expression ‘her hands are as dirty as feet,’ is no longer as true of the entire human collectivity as it was in the 17th century.

But beyond the obviously yucky (and possibly risky) nature of podophilia in premodern times (Our Savior’s thing for foot-washing notwithstanding), feet are inherently grotesque. We may have our heads in the clouds, straining toward godhood, but we’re standing in shit, as Bataille pointed out. In the hierarchy of the body, the head is the sovereign, seat of the self; the feet are mere peons (from the medieval Latin pes, for “foot”). The foot, Bataille theorizes, is base, in both senses of the word. (Does this explain the ubiquity of hardcore porn, on the Web, in which people perform unimaginably bizarre acts with their socks on?) “[T]hough the most noble of animals,” writes Bataille, Man “nevertheless has corns on his feet; in other words, he has feet, and these feet lead an ignoble life, completely independent from him.” Toes, for Bataille, are the worst: freakish parodies of fingers, creeping things that creepeth upon the earth.

The gothic photos that accompany his essay, in Encyclopaedia Acephalica—blurry, nocturnal images that look like something out of CSI, say it all:

(Jeepers, peepers, where’d you get those creepers?!?)

“[F]ingers have come to signify useful action and firm character, the toes stupefaction and base idiocy,” writes Bataille. Long, thin fingers are shorthand for mental dexterity; in Conan Doyle’s Sherlock Holmes stories, the brilliant detective relaxes, after a long day of ratiocination, at the symphony, “gently waving his long, thin fingers in time to the music” (“The Red Headed League”); likewise, in the Doyle novella “The Hound of the Baskervilles,” a character’s keen intellect is symbolized by “long, quivering fingers, as agile and restless as the antennae of an insect.” By contrast, stubby, simian fingers are a social Darwinist’s evidence of inborn inferiority, if not atavistic imbecility; Spy magazine, the lacerating humor magazine of the late ’80s, once mocked Donald Trump as a “short-fingered vulgarian.” If toes evoke “base idiocy,” then fingers resembling toes are proof positive of mental deformity. Hipgnosis, the graphic artists who designed the brain-curdling cover of the eponymous debut album by the prog-metal band Toe Fat (1970), followed this chain of association to its absurd extreme:

Such associations, Bataille, maintains, are why “classic foot fetishism leading to the licking of toes” is condemned by official culture as “a base seduction,” a grotesque burlesque of “normal” sex. And the big toe, he insists, is the ghastliest of these appendages, with its “hideously cadaverous and at the same time loud and defiant appearance.” (Those French!)

So what does Madonna’s big toe mean, exactly? Sex, duh. According to the New York Post‘s “Page Six,” Madonna wanted Mario Testino’s photos for the Versace ads to be “provocative and sexy,” flaunting “how good she looks at 46.” Groping for deeper meaning, we remember that Madonna is a lapsed Catholic, so maybe Anthony N. Fragola’s 1994 essay, “From the ecclesiastical to the profane: Foot fetishism in Luis Bunuel and Alain Robbe-Grillet” in the Journal of the American Academy of Psychoanalysis, can shed a little light: “Bunuel believes that sexual compulsions and deviations originate from the repressive teaching of Catholicism that equates sex with guilt,” writes Fragola. L’Age d’Or is the cinematic equivalent of the 39 lashes, administered with relish by an ex-Catholic who devoted his creative life to scourging the church as well as the unblinking, ungulate herd that filled its pews. The movie is Bunuel’s mordantly anti-Catholic ode to l’amour fou (“mad love”), the libidinous frenzy the Surrealists prescribed as shock treatment for repressed, repressive bourgeois society; the infamous toe-sucking scene, still crazy after all these years, is its centerpiece.

Is Madonna using Versace’s ad to do some covert signifying of her own, playing footsie with podophilia as a papa-don’t-preach retort to the Vatican, which recently issued a maledictum decrying New Age spirituality, Eastern mysticism, and the “Kabbalah as espoused by Madonna”? To be sure, she’s no stranger to anti-Catholic sacrilege or market-tested outrage, calculated to ruffle Letterman’s forelock. Besides, wasn’t she sucking somebody’s toe in that scene with the skinheads in Sex, the book that made Helmut Newton safe for heartland America? And isn’t that her, slurping away at Tony Ward’s foot, on the back cover of her record Erotica (1992)?

Or is she signaling her gay fandom that she’s still the Phallic Mother of their mirrorball dreams? Or is she simply making the latent content of the Versace aesthetic, which combines the tasteful understatement of Caesar’s Palace in Vegas with the rectitude of Caligulan Rome? In Fetish: Fashion, Sex & Power, Valerie Steele asserts that designers like Versace “frequently copy ‘the style, if not the spirit, of fetishism.’ […] To understand contemporary fashion, it is crucial to explore fetishism.”

Steele links the boundary-pushing edginess of couture to sexual perversions, which are simultaneously manifestations of late-night psychological cravings and acts of symbolic rebellion “against the subjugation of sexuality under the order of procreation and against the institutions which guarantee this order.” (She’s quoting Marcuse, here.) Fashion, the ultimate commodity fetish, exists in the context of a consumer culture that is at once hedonistic and puritanical. Pushing manufactured desires and peddling instant gratification, consumer culture is at the same time deeply phobic about sexual difference and deviant desires—”mad love” whose unorthodox, “unproductive” (in every sense) urges refuse to be channeled into more profitable outlets, such as blowing one’s wad at the local megamall.

Ironically, fetish fashion is itself the instrument of what Marcuse called “repressive desublimation,” his term for the socially sanctioned expression of radical impulses that might assume a more genuinely political shape if not harmlessly acted out in the pleasure dungeon. In that sense, Madonna and Versace are perfect together: in order to stroke their fan bases yet play in the arena of mass culture, both need to negotiate the perilous strait of boho perversity and upper-class power, dominatrix and, respectively, Eurotrash jetsetter (Donatella Versace) and domestic diva (Madonna). Madonna wants it both ways: She wants to be the author of children’s books with titles like Mr. Peabody’s Apples (do not even go there), the supremely capable mistress of the Upstairs, Downstairs manor who told CBS Early Show interviewer Harry Smith, “I get up in the morning with my kids…and then they go off to school, and I stay home and I become a sergeant in my house and…start going through the lists that have been made by my hardworking, diligent staff and start delegating responsibility,” the paragon of good breeding who confided to Cynthia McFadden of ABC’s 20/20 that “even my children have to clean up their mess, clean their rooms, manners, thank you, pick up your dishes, gratitude, being grateful—that has to happen.” But between impersonations of a mockney Martha Stewart, she still needs to play tonsil hockey with Britney Spears on TV, now and again, in order to justify the love of the core fandom that cherishes its memories of her more salacious days. Fetishistic yet boomer-friendly, elegant but a little bit bodacious, the Versace sandal is just the thing for the Desperate Housewife who was once a Boy Toy.

If the shoe fits, wear it.

(Props to feminist critic and body scholar Margot Mifflin for pointing out the ad that launched this essay.)

The Anatomical Unconscious (Dery lecture at the National Library of Medicine)

You are cordially invited to… Another (!) lecture on Netporn, the subject that has captivated minds and moistened loins around the world. This talk is part of the Frontiers of Contemporary Thought series, jointly produced by the Federal University of Rio Grande do Sul (UFRGS), the University of the Sinos River Valley (UNISINOS) and Copesul, […]