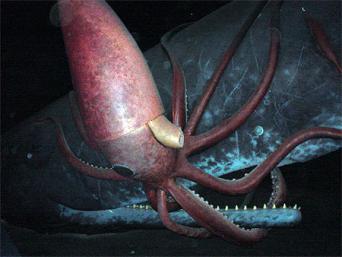 Battle of the Titans: Giant squid (Architeuthis dux) and Sperm Whale locked in mortal combat in the vasty deep…of the American Museum of Natural History’s Hall of Ocean Life.

When Clive Thompson ran an item on his brain-fryingly great blog, Collision Detection, about a colossal squid (Mesonychoteuthis hamiltoni) that fishermen hauled in off the coast of New Zealand—a 990-pound, 39-foot leviathan that is half as big again as the next largest specimen ever caught—one commenter wondered, “My question is: ‘Why do we find so many NOW?! I mean, [these] things existed for thousands of years, it is CENTURIES [since we began] fishing in those seas and then BAM! We start fishing them up like sardines…Isn’t it weird?'”

As Tom Wolfe would say, “But…exactly!”

Of the 15 known specimens listed on Wikipedia, nine have been reported since 1979. A National Geographic.com story about the saucer-eyed colossus mentioned one explanation: Fishing boats are venturing, increasingly, into Antarctic waters, where Mesonychoteuthis is known to feed on Patagonian toothfish. Whatever the reason, close encounters with monsters of the deep seem to be on the rise, and the creatures in question seem to be getting bigger and weirder with each encounter. Time was when giant squid were the stuff of Peter Benchley beach novels, sufficient to clear the water at the Kennedy compound for weeks. When Japanese researchers filmed a giant squid in 2006, squid geeks were agog, and a video clip of the thrashing monster seemed to be everywhere, online.

But the giant squid is comic relief compared to Mesonychoteuthis, which with its razor-sharp beak and tentacles bristling with nasty-looking hooks (the better to hang onto its prey), is “not just larger but an order of magnitude meaner” than the mere giant squid, as New Zealand teuthologist Steve O’Shea told the BBC when a specimen was recovered in 2003. Kat Bolstad, a research associate at the Auckland University of Technology, put it bluntly: “This animal…is…something you are not going to want to meet in the water.”

Where will it end?With the grotesque megasquid brought to CGI life in the Animal Planet series “The Future is Wild,” which projected Darwinian evolution 200 million years into a posthuman future, where mammals, birds, and reptiles are extinct, but air-breathing, elephant-sized Megasquid roam the forests and tiny Squibbons (gibbon-like squid) scuttle through the trees? The series hints that Squibbons, being highly intelligent, may evolve into sentient beings, usurping the evolutionary throne from the humans who once dominated the planet. In other words, the calamari shall inherit the earth.

One T-shirt vendor has the answer to all of these questions: “The cephalopod biomass is now greater than the human biomass. We don’t know how many there are or how big they get. We are NOT ready. Play it smart.” Playing it smart, in this case, means buying a T-shirt emblazoned with the words “Welcome Squid Overlords” and a cartoon image of a giant squid. Or is it colossal?

Here’s where you come in: I’m writing an essay for Discover magazine on this subject, equal parts hard science and cultural criticism. (The assignment won me an audience with the American Museum of Natural History’s resident specimen of a giant squid, whose pickled tentacle I got to fondle, still dripping from the alcohol bath in which the leviathan reposed. Groping a kraken! How cool is that?) I’d love to hear your thoughts, here in the comment thread, on:

Why we’re so obsessed with giant squid.

Why the image of the Battle of the Titans (giant squid versus Sperm whale) haunts the mass mind.

Whether you think the squid, giant or mere calamari fritti, is emerging as the totemic animal of the Screen Age, its morphology—all brain, hands, and saucer eyes—a metaphor for our increasing reduction to brains with eyes, in Matrix culture.

Any sightings of the squid meme you’ve come across.

(Naturally, if I quote you, I’ll contact you for proper attribution—i.e., how you’d like to be ID’d—so be sure to leave your e-dress if you comment.)