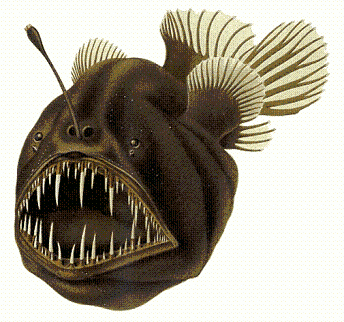 Any more thoughts on the questions I posed? Still curious to hear your thoughts, especially on recent sightings of the squid or octopus meme.

In the meantime, a postscript to my last post:

The Abyssal appears, in the mass imagination, as shorthand for the stygian, the cthonic—a lightless realm of bioluminescent nightmares, a Dalinian dreamworld populated by bathypelagic monsters unlike anything on land. Speaking of whom, Dali famously used the Abyssal as a metaphor for our collective dream life, delivering a lecture in a bell-helmeted deep-sea diving suit, the better to descend into subconcious (he nearly asphyxiated in mid-lecture) .

As Mikita Brottman implies, the Abyssal is its own binary, appearing in Jacques Cousteau and David Attenborough nature documentaries as a hallucinogenic fantasia on one hand, all rainbow-hued tropical fish and Day-Glo coral reefs and kelp forests, gently rocked by the waves, and on the other as an inky-black underworld populated by grotesque creatures, some of them blind, albino monstrosities. (In this context, James Cameron’s bathetic Abyss represents a mythopoeic attempt to reconcile visions of the undersea kingdom as celestial and cthonic.)

The abyss often figures, in the pop unconscious, as the dark doppelganger to space exploration: the race to the stars, reversed. And what about the aquarium, which domesticates the deep-sea sublime, offering a porthole on the Mariana trench for armchair Captian Nemos? When did bourgeois aquarium owners start putting divers, treasure chests, and the crumbling ruins of Atlantis in their aquariums? And what do they mean?

Random thought: Is our persistent vision of the Deep as a darkworld populated by monsters, a counterweight to the Jungian vision of the sea as nurturing memory of intrauterine bliss, an evolutionary hangover—a dim but troubling recollection of prehistoric horrors (see Chased By Sea Monsters by Nigel Marven)?

Or does the Abyssal represent the last terrestrial frontier, the rainbow’s stubborn refusal to be unwoven by human knowledge? As the noted postmodern philosopher Donald Rumsfeld reminds us, there are known knowns and known unknowns and unknown unknowns—things we don’t even know we don’t know—into which last category must fall the undiscovered denizens of the deep. Is it the business of the Abyssal to be the inexhaustible account from which we withdraw our wonder and horror, the last great repository of awe in a world descralized by science, cynicism, and the media? If so, then embodied myths like Architeuthis and living fossils like the coelacanth are totemic animals, giving shape to the notion that monsters may still lurk in the far corners of Google Maps, that time travel may exist, that the dead may rise again, that science has not killed magic and mystery dead.