Recently, while ego-surfing GOODREADS, I stumbled across a review of my 1999 meditation on millennial America, The Pyrotechnic Insanitarium:

“i re-read this book and enjoyed it as much the second time. its focus is really on some of the darker threads of the fin-de-millennium american culture. end of the century apocalyptic schizo kinda stuff. killer clowns, branding, post humanism, aliens, and conspiracies. it is just as relevant now as it was when i first read it at the end of the 90’s. it confirms to me that somewhere near the end of 2001 time started running in reverse…”

Naturally, the thought that everything old is new again gives hope to those of us midlist authors languishing in the remainder bin of history. Then, too, there is an almost ’90s-style sense in what was once referred to (in all seriousness) as our American empire, that the gyre is widening, the center cannot hold, and the tassel-loafered Wall Street swine jostling for space at the public trough should be driven off the nearest cliff. On bOING bOING, Dan Gillmor sounded a portentous note:

“Like lots of folks these days, I find myself speculating about whether we’re heading into something worse than a bad recession, such as the kind of calamity that tests civilization. Back in my younger days I played music for a living. […] At one point, gloomier than usual about humanity’s future, I wrote a song about how people like us would (or wouldn’t) get along when the apocalypse happened, something I feared might be imminent. It wasn’t, then, but I’m wondering again.”

Deep in the comment thread, a reader named Dainel wrote, “All this talk of doom reminds me of 1999. Don’t anyone remember that? Is every one here less than 20 years old?”

True, the militia movement seems to have switched into dormant mode (although white supremacists still fantasize about bringing The Turner Diaries‘ Mother of All Race Wars to a bloodbath near you). And the omens of millennium that darkened American dreams a decade ago—alien autopsies, black helicopters, Heaven’s Gate suicide cultists, Timothy McVeigh-style Angry White Guys, Unabombers who just wanted to watch industrial society burn—have given way to a low-lying despair, the deepening sense that the United States of the near future is going to look a lot like the Weimar republic in its last, hyperinflationary days, when people were using banknotes as wallpaper and postage stamps had a face value of 50 billion Marks.

Still, Wired is once again waving the techno-libertarian flag, though its triumphalism is a bit frayed around the edges and looks depressingly like garden-variety neo-liberalism (with a dash of Gladwellian screw-the-spotted-owl contrarianism to validate its cubicle-warrior coolness quotient). 24 is the new X-Files.
Unfrozen CyberGuy Kevin Kelly—who was wondering, not so long ago, “Say the Dow hits 100,000 by 2010. Would that surprise you?”—is back with yet more musings on the Unabomber. The inimitable Terence McKenna is no longer with us to hawk his ’90s vision of the Coming Singularity at the End of Time™, but a flock of McKenna epigones—the Marjoes of the magic mushroom set, the Robert Schullers of psychoactive alkaloids—are barnstorming the Esalen hot tub-and-Burning Man circuit with suspiciously familiar-sounding talk of a zodiac mindwarp in 2012. 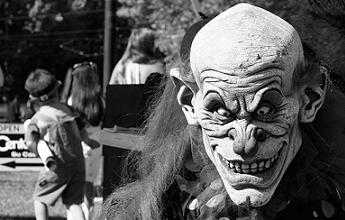 What better time for me to catch the last wave of the ’90s revival, disaggregate The Pyrotechnic Insanitarium, and offer up a few chapters for your delectation, in PDF form, courtesy Scribd?

Here, then is, my first donation to the Creative Commons:

(I still hold copyright to this essay, obviously, but encourage readers to re-post and re-publish it at will, as long as you add the following boilerplate:

©Mark Dery; this essay originally appeared as a chapter in The Pyrotechnic Insanitarium: American Culture on the Brink.

A link to the online bookseller of your choice, or to the Pyro page on this site, would be the right thing to do.)

In the Scribd blurb, I synopsize it as follows (in the Bob Dole-ian third person):

Using as his point of departure Lon Chaney’s chilling observation that “there’s nothing funny about a clown in the moonlight,” Dery deconstructs the postmodern archetype of the psychopathic clown. In this perversely funny, closely argued essay, Dery ranges broadly over the psychic geography of American culture. Balm for the souls of those scarred for life by childhood encounters with balloon-twisting bogeymen in fright wigs.

“Can’t sleep, clowns will eat me…” 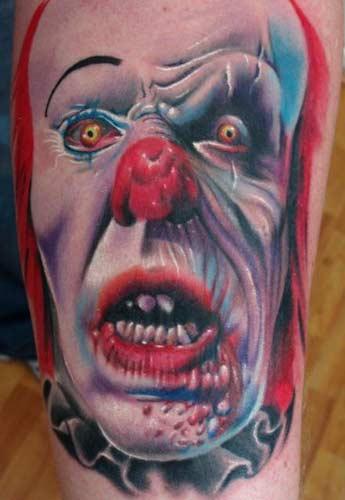 (Thanks to Gareth Branwyn, for his kind words about my essay—the inspiration, in part, for my decision to donate it to the Gift Economy.)