WHAT: “Nature Morte: Formaldehyde Photography and the New Grotesque,” a chapter from The Pyrotechnic Insanitarium: American Culture on the Brink (Grove/Atlantic: 1999) uploaded to the file-sharing site SCRIBD. 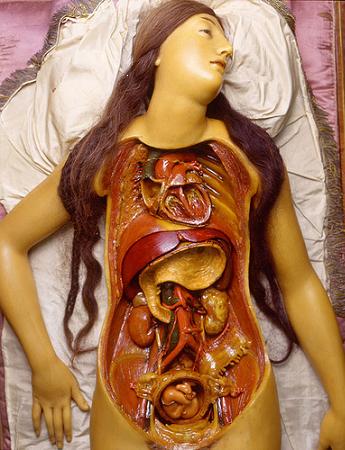 THE OFFICIAL VERSION (SCRIBD ENTRY): In “Nature Morte: Formaldehyde Photography and the New Grotesque,” a chapter from his meditation on the millenial zeitgeist, The Pyrotechnic Insanitarium: American Culture on the Brink (Grove/Atlantic: 1999), cultural critic Mark Dery analyzes the abject aesthetic he calls the New Grotesque, exemplified by the photography of Joel-Peter Witkin and Rosamond Purcell, Nine Inch Nails videos such as “Closer,” David Fincher’s movie Seven, and most notably the obscure subculture of medical-museum tourists whose mecca is the Mutter Museum in Philadelphia. “If the Enlightenment ushered in the ‘disenchantment of the world,’ as Max Horkheimer and Theodor Adorno put it, postmodernism returns us to the age of wonder—and terror,” writes Dery. “Now, as we return to a world of gods and monsters, there’s a burgeoning fascination, on the cultural fringes, with congenital deformities, pathological anatomy, and other curious from the cabinet of wonder.”

Drawing on Lawrence Weschler’s study of the Museum of Jurassic Technology (Mr. Wilson’s Cabinet of Wonder), Gwen Akin and Allan Ludwig’s seminal essay “Repulsion: Aesthetics of the Grotesque,” Julia Kristeva’s notion of the abject, Wolfgang Kayser’s landmark study of the grotesque, and Oliver Wendell Holmes’s 1845 paean to “worshippers of morbid anatomy,” Dery theorizes the Pathological Sublime, an aesthetic emotion that is equal parts horror and wonder, inspired by works of art (or nature) that hold beauty and repulsion in perfect, quivering tension. The Pathological Sublime is the sensation Emily Dickinson had in mind when she wrote, “‘Tis so appalling—it exhilarates…”

NOTE: Author reserves all rights. However, users are free to download this PDF for their own use and to circulate it freely AS LONG AS they do not post the entire PDF online or publish the entire PDF in print. (Feel free to blog this page and link to it, though! And linking to the Amazon page for the book would be The Right Thing to Do.) No re-use or re-publication of this PDF FOR PROFIT, in any medium, is permitted.