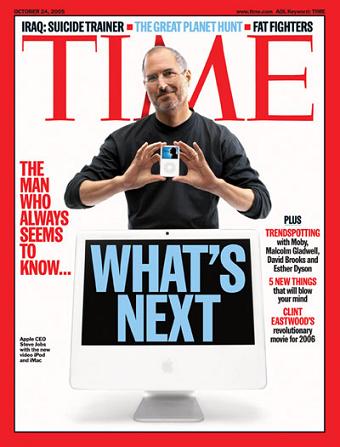 The other day, as I was musing idly, one foot in the remainder bin, the other on a banana peel, Time came calling, out of the blue. They were interested to know if I’d be willing to play a walk-on role as fringe futurist in their “What’s Next” issue (October 24, 2005, on newsstands now). A few days later, I found myself in the standard-issue characterless conference room, playing brain pong with Tim O’Reilly, Malcolm Gladwell, Clay Shirky, David Brooks, Esther Dyson, and Moby. (What were they thinking?!?) <g> I have next to nothing in common with them, but it was fun nonetheless, a real thought-rattling kick in the head. Transcript here.