We interrupt the unending torrent of comment spam (“Hello people, your site is best! Nice site look this: teen lesbians showering!”) to flog our product.

The latest, insect-themed issue of the cultural quarterly Cabinet is in bookstores and on newsstands now, and includes my essay on the ginormous Jerusalem Cricket, which is, in fact, neither a cricket nor from Jerusalem. (As Linda Richman used to say on Saturday Night Live: Discuss.) Titled “Armies of the Night: Satan’s Fetus Stalks the Suburbs,” the article is at once an overheated exegesis of the J.C. as myth and symbol, an eco-political critique of SoCal sprawl, and my attempt to exorcize the post-traumatic stress engendered by a nocturnal confrontation with one of these grotesque animals, an experience no Californian who has run across a J.C. in the dead of night will ever forget. (The Jerusalem Cricket, a.k.a. Stenopelmatus, ranges widely west of the Rockies but is ubiquitous in California, where sprawl’s encroachment on the insect’s habitat is giving rise to more and more confrontations between the insects and shocked-and-awed suburbanities. ) 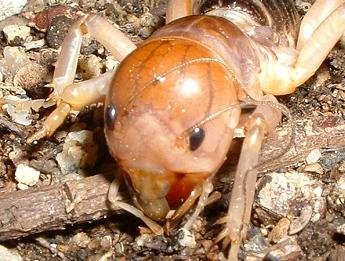 In a jump cut, I was out of bed, across the room, switching on the light to reveal a crawling horror: a humongous insect, thicker than a man’s thumb, maybe three inches in length. It had powerful, cricketlike hind legs and a caramel-colored abdomen, ringed with amber bands. Its head was dried-blood red, with the lacquered glossiness of a candied apple. It made me think of a skinned thumb, or the swollen head of an aroused penis, shiny with precum.

The creature was obscene in its ugliness. But what was it? David Cronenberg’s idea of a partial-birth abortion? A stool sample from the man-eating xenomorph in the movie Alien? A nightcrawler from the cultural unconscious?

Sweeping the thing into a dustpan, I shuddered at its weight as I carried it to the bathroom. To my horror, the creature swam against the tide when I flushed, scrabbling frantically at the toilet bowl. I flushed. And flushed. And flushed. (Die, monster, die!) At last, it disappeared down the porcelain gullet. The toilet made a gagging sound.
Trembling with revulsion, I laid the heavy ceramic lid of the toilet tank across the closed seat to ensure that no six-legged freak could exact revenge, even if it did manage to clamber up, out of the sewer. Not that I slept much that night. In the dark, I could still see those beady black eyes staring back at me unblinkingly as I sent the abomination swirling into Eternity with a final flush.