TONIGHT’S LECTURE HAS BEEN CANCELLED AND WILL BE RE-SCHEDULED FOR EARLY JANUARY. Reports of the Mother of All Blizzards, which is predicted to dump up to 20 inches of snow across the Northeast, have dissuaded me from braving gale-force winds and man-eating snowdrifts. Somehow, the thought of fishtailing all over the Garden State Parkway or, alternately, marooned in Grand Central doesn’t appeal. Nor would I wish that on any attendee devout enough to risk such hazards. Let’s try again in early January, shall we?

But if you are in the area and easily able to attend the Observatory’s Krampus party, please do! Host Joanna Ebenstein writes to say that the “Observatory Krampus-Themed Holiday Party, inspired by our favorite Christmas character, Krampus, St. Nicholas’ mischievous/evil Eastern-European sidekick,” still very much ON. “We had planned to begin the party at the end of Dery’s lecture, but will now begin at 8:00 PM, to amuse the disgruntled masses who did not recieve this cancellation alert. The party is free of charge, and will feature live-music (Krampus-Carols!) by Ruprecht and the Birch Switches, holiday gifts, birch-switch-beatings, treats, rusty chains, lolling tongues, and, of course, booze. Entrance to the party is free, but do bring cash for buying drinks, treats, & holiday gifts!” 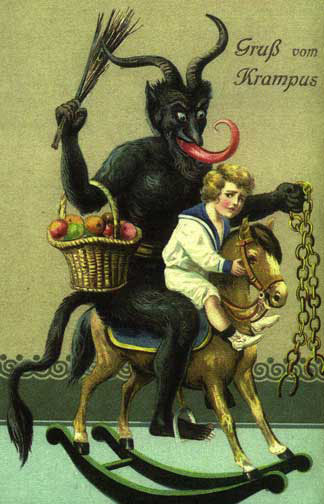 WHAT: An illustrated lecture, followed by a Festivus—er, Observatory Holiday party, “complete with lovely alcoholic beverages, themed snacks, and live music as performed by Brooklyn’s own Ruprecht and The Birch Switches, who will perform your favorite Krumpus Carols.”

Few Americans know that Santa descends from the mock king who held court at Saturnalia, the Roman festival celebrating the winter solstice. Or that he shares cultural DNA with the Lord of Misrule who presided over the yuletide Feast of Fools in the Middle Ages—lewd, blasphemous revels that gave vent to underclass hostility toward feudal lords and the all-powerful church.

By the late 19th century, Christmas in Manhattan was an excuse for the rabble to go wilding from door to door in upper-class neighborhoods, demanding booze and cash from terrified householders in exchange for an off-key (and sometimes off-color) yuletide song. In desperation, Washington Irving, Clement Clarke Moore, and other members of New York’s cultural elite invented Santa Claus—and Christmas as we know it—as a means of domesticating the drunken revels of the dangerous classes. Their bourgeois myth was designed to channel lumpen unrest into a more acceptable outlet: a domestic ritual consecrated to home, hearth, and conspicuous consumption.

In “Satan and Santa: Separated at Birth?,” Dery, a cultural critic and book author, takes a look at the Jolly Old Elf’s little-known role as poster boy for officially sanctioned eruptions of social chaos, as well as his current status as a flashpoint in “the Christmas Wars”—cultural battles between evangelicals, atheists, conservatives, and anti-consumerists over the “true” meaning of Christmas. Along the way, Dery considers New Age theories that Santa is a repressed memory of an ancient Celtic cult revolving around red-capped psychedelic mushrooms; Nazi attempts to re-imagine Christmas—a holiday consecrated to a Jewish baby, for Christ’s sake—as a pre-Christian invention of tree-worshipping German tribes, in some misty, Wagnerian past; and the suspicious similarities between Satan and Santa, connections that have fueled a cottage industry of conspiracy theories on the religious right. 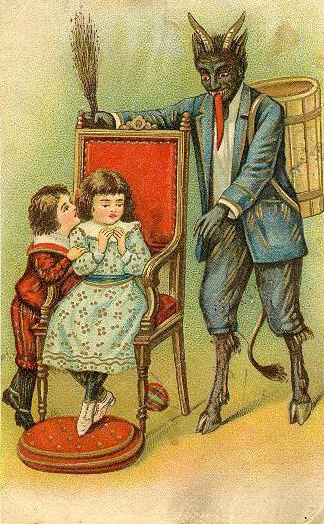