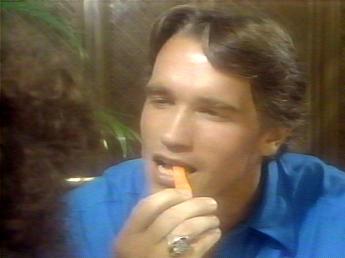 Back from lecturing about sex, society, and Netporn in Porto Alegre, Brazil, for which I had prepared myself, as I told my audience, by screening the 1983 Playboy video “Carnival in Rio.” Hosted by a helmet-haired Arnold Schwarzenegger, groping everything within reach of his pithecanthropoid arms and nudge-nudge, wink-winking (in his newly acquired frat-tuguese, which seems to consist entirely of come-on lines) about the delights of the mulatta and the bunda, the video is a cringe-inducing exercise in post-colonial cluelessness. It amounts to starring Conan the Barbarian in Black Orpheus. The section in which Our Man in Rio teaches a bemused Brazilian babe how to bite and suck a carrot—Freud-friendly close-ups of a carrot sliding in and out of heavily glossed lips, while Arnie chortles, “Good, yesss“—is enough to summon a righteously pissed Frantz Fanon forth from the tomb.

Anyway, Brazil was stupendous, a mind-stretching experience. With its cosmopolitan thinkers, fluent in colonial history and postmodern thought (at a churrascuria, my professorial hosts in Porto Alegre gave me the equivalent of a wine-fueled graduate seminar on the Brazilian cultural psyche); its stunning contrasts between amok urbanism and wild nature; and its mind-stretching juxtaposition of First World turbo-capitalism and Third World bricolage, Brazil pushed the boundaries of my thought. As a citizen of the Republic of Fear, where the air is thick with talk of terrorist threats and invading immigrants, and where the citizenry has been gulled into offering up its civil liberties as a burnt offering to the god of paranoia, I was thrilled by what Mike Davis would call the “magical urbanism” of Brazil’s exuberant metropolises, and by the dark magic of its primordial matta—a smack-in-the-face reality check to laptop-toting citizens of American empire who think they’ve seen it all.

Some who attended my lecture have asked for hardcopy. Happily, a version of the text (“Paradise Lust: Pornotopia Meets the Culture Wars”) has just been published in C’Lick Me: A Netporn Studies Reader by the Institute for Network Cultures in Amsterdam. The anthology also includes my interview with “realcore” researcher Sergio Messina, which originally appeared on this site.

In unrelated news, the latest issue (June 2007) of ID magazine includes my “Rant” column on the cult of the iPhone, in which I inveigh, on behalf of the conscientous objectors I call iTheists, against the interminable, culture-wide geekgasm that has greeted the release of the iPhone. This hallelujah chorus is hardly a surprise, given “the brown-nosing obsequiousness of most tech coverage,” complicit in “the lip-biting, teary-eyed, Moonie-mass-wedding jubilation that greets the release of every Apple product.” You’d think this thing was the infinitely regenerating prepuce of the Risen Jesus, for chrissakes. Give it a rest, Pod people. The geeky paeans to God’s little blobject, the helpful hints to Jobs about how to make it even cooler: You’re getting a little too Raelian about this thing, and it’s starting to creep the rest of us out.