Recently, while submitting to the fond attentions of a dental surgeon, I found myself musing idly, in an opiated haze, about the symbolic weight of teeth—musings disturbed only by the surgeon’s resolute yanking on the offending tooth, a yanking that came to me only distantly, as a not entirely unpleasant tugging, punctuated by the occasional squeak, reminiscent of the sound of a nail being pried out of a floorboard. Maybe it was the Novocain, but I found myself wondering if the widespread fear of dentists is at least in part a subconscious, perhaps even archetypal, fear of teeth, or if that’s just the perspective of someone whose dental history is written in anxiety and agony (and all the requisite drama-queen hysterics that go with them).

Certainly, the mouth, as the biggest breach in the body’s integrity, holds its own terrors (What’s this big hole in the middle of my face?! What if something falls out? What if something falls in?). Not for nothing has the face of mythic horror been a slavering maw (Alien), a toothy portal welcoming you to the afterworld (Jaws).
Teeth are scarier still. TV dramas such as CSI: Crime Scene Investigation and police-procedural fiction such as Patricia Cornwell’s novels about the forensic pathologist Kay Scarpetta have forged an ubreakable link, in the mass imagination, between teeth and death. In such narratives, teeth and dental records are often all that remain of the murdered; mute witnesses to their owner’s last moments, they testify to the victim’s identity and, ultimately, help finger the perp.
Teeth are by definition uncanny, the point at which the skull beneath the skin erupts through the body’s surface. It’s the Return of the Repressed (© Sigmund Freud; all rights reserved)—in this case, the death we do our best to forget while we’re busy living. A bony reminder that mortality is the subtext lurking just beneath the human comedy, teeth are the skeleton’s insistence that it, too, is ready for its close-up.
Okay, I’m over the top, here, but sometimes too much is just enough. Besides, who can top Freud, who took dental horror to Siegfried & Roy-like heights of rhetorical excess in his notorious theorization of the vagina dentata? Sure, Freud’s Victorian hysterics were all about sexual phobias, but his misogynistic horror story wouldn’t have packed the wallop it still does without the old Viennese devil’s canny use of the Dental Uncanny.
Poe, a Freudian avant la lettre, gave shape to primitive male fears of the Monstrous Feminine in his story “Berenice,” in which the narrator Egaeus, monomaniacally obsessed with his lover’s teeth, yanks them from her undead cadaver. His obsession is equal parts desire and horror:

The teeth!—the teeth!—they were here, and there, and everywhere, and visibly and palpably before me; long, narrow, and excessively white, with the pale lips writing about them, as in the very moment of their first terrible development.

(The critic Killis Campbell has suggested that Poe’s tale was inspired, in part, by a newspaper account of grave robbers who pried teeth out of corpses for use, presumably in the manufacture of false teeth, by local dentists, and Richard Zacks claims, in his eccentric compendium of weird facts, An Underground Education, that a “whole generation wore ‘Waterloo’ dentures made from teeth yanked from the corpses on the battlefield, and the practice continued as late as the Civil War, when thousands of teeth were stolen from bodies moldering at places like Bull Run and Gettysburg.” This ghoulish practice is echoed, in contemporary dentistry, by the use of “cadaveric pure aura mater sterilized under X-rays” to facilitate bone regeneration around dental implants.)

Illustration: Fritz Eichenberg. From Tales of Edgar Allen Poe (New York: Random House, 1944), author’s collection.
Freudians have extracted psychosexual subtexts from “Berenice,” reading Poe’s story as a literalization of male attempts to defang the vampiric feminine. Given the psychoanalytic interpretation of the mouth as a visual metaphor for the vagina (and vice versa), Berenice’s predatory “smile of peculiar meaning,” which so terrifies—and mesmerizes—the narrator, hints at the vagina’s unsettling (at least, to the patriarchy) ability to swallow all comers and spit them out limp, drained of their potency. By robbing Berenice of her gleaming teeth, the narrator enacts a sympathetic magic, “castrating” the Phallic Mother and repossessing the emblems of his lost virility. (In this reading, the teeth are phallic symbols. Isn’t everything?)
Still not convinced?

Exhibit A: Actual photo of a real, live vagina dentata, found on Rotten.com.

Dustin Hoffman, under the drill in Marathon Man.
As always, there’s a fine line between fear and fetish, and a Google search for “dental retractor” uncovers a clammy sub-subculture of that branch of S/M that inclines toward medical fetishes.
(Google results may be biased by the fact that the fetishists’ use of “retractor” differs from the accepted dental meaning of the word. To a dentist, a retractor is a small, pencil-shaped steel instrument, typically with a hook at the business end or, in the specific case of cheek retractors, an unintentionally hilarious contraption that looks like

By contrast, when a fetishist talks about a retractor, he’s talking about something like

Dental fetishists rejoice in mock-medical paraphernalia, from double-ratchet retractors to dental forceps guaranteed to “force a mouth open to a maximum diameter of 2 1/8.”” (To what end, you ask? Discretion bids me leave the details to the reader’s fevered imagination.)
What is this? The psychosexual equivalent of the Stockholm Syndrome? Are those of us sentenced, by unlucky nature and unwise nurture, to long hours under the drill fated to act out nocturnal psychodramas in which we exorcize the traumas of the chair in pornographic narratives starring us, a willing co-star (or two), and the odd double-ratchet retractor? If so, I only hope that the nitrous oxide flows freely, and that I emerge from such transactions with all of my molars intact.
Go ahead: Rinse and spit. 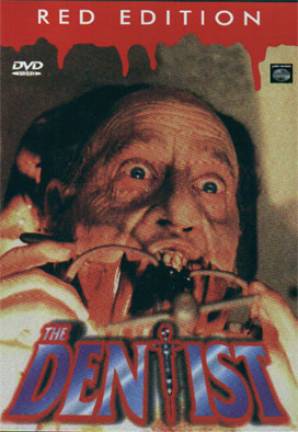