Brother From Another Planet 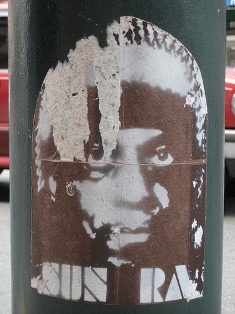 This Saturday, in Tilburg, the Netherlands, I’ll be keynoting ZXZW, an arts festival devoted, this year, to Sun Ra and headlined, of course, by Sun Ra’s Arkestra.

The Basics: “In a keynote speech Dery will examine the science-fictional (i.e., AfroFuturist) and techno-bricoleur aspects of Sun Ra’s work, setting them within the context of African-American culture’s relationship to technoculture and sci-fi mythology.”

I’ll riff, too, on Ra’s self-taught hermeneutics and voodoo numerology, the deeply gnostic strains in his music and philosophy, the homosocial ethos that undergirded his band’s experiment in communal lliving (as well as its historical relation to American utopian communities), his pop Egyptology and UFO-ology, the relationship between his often hand-drawn record covers and the notion of landscape paintings and psychedelic record cover art as evolutionary precursors of virtual reality, and Ra’s sci-fi theories of race.