Terrorists, tabloid media, and Xtreme culture: To many, America seems like an infernal carnival, equal parts funhouse and madhouse—a “pyrotechnic insanitarium,” to borrow a turn-of-the-century nickname for Coney Island. Are we on the eve of an Age of Unreason?

From the far left to the far right, on talk radio and the op-ed page, more and more Americans believe that the social fabric is unraveling. Celebrity worship and media frenzy, suicidal cultists and heavily armed secessionists: modern life seems to have become a “pyrotechnic insanitarium,” Mark Dery says, borrowing a turn-of-the-century name for Coney Island. Dery elucidates the meaning to our madness, deconstructing American culture from mainstream forces like Disney and Nike to fringe phenomena like the Unabomber and alien invaders. Our millennial angst, he argues, is a product of a pervasive cultural anxiety—a combination of the social and economic upheaval wrought by global capitalism and the paranoia fanned by media sensationalism. The Pyrotechnic Insanitarium is a theme-park ride through the extremes of American culture of which The Atlantic Monthly has written, “Mark Dery confirms once again what writers and thinkers as disparate as Nathanael West, Fyodor Dostoyevsky, Sigmund Freud, and Oliver Sacks have already shown us: the best place to explore the human condition is at its outer margins, its pathological extremes.”

Praise for The Pyrotechnic Insanitarium:

“In the mid-’90s, if you wanted to understand your contemporary moment, there was no getting around Escape Velocity. And as we barreled toward the year 2000, we were bombarded with countless tomes seeking to analyze our collective panic, but I never found a better one than The Pyrotechnic Insanitarium.” — David Hudson, Green Cine

“The Pyrotechnic Insanitarium is both highly entertaining and deeply disturbing in a way that Mark Dery has made his own. The ever-growing pathologies of millennial America show up clearly on the X-ray screen of his penetrating analysis. Racily written, and filled with shrewd insights, this guidebook to the madhouse of the modern world is essential reading. ” — J.G. Ballard, author of Crash

“Given its utterly bizarre terrain, this is a very lucid book. I can only imagine the effect of these essays on, say, some bright but sheltered 17-year-old male Southern Baptist. It would likely cause the kid’s skull to spontaneously rupture. The book is also extremely funny. Mark Dery has a hammerlock on the zeitgeist. He may be the best cultural critic alive. — Bruce Sterling, Bookforum

“Dery’s book of essays lives up to its title. It consists of acrimoniously delightful, carefully studied scrutinies of current extreme behaviors, running the gamut of social phenomena, from the genuinely strange to the full-tilt insane. However, instead of succumbing to the temptation of depending merely on the freak-show shock value of material like this, Dery relies on his own visceral insight to explain these seeming aberrations as symptoms of a transnational, global economy come unglued. In wry, fresh, deadly lucid prose, Dery argues that this roiling pressure is bursting the ‘monolithic orthodoxies’ of culture, producing a ticking time-bomb. — Greg Burkman, Seattle Times

“An exhilarating, dissonant ride…[The Pyrotechnic Insanitarium] whiplashes from dissections of infomercials and daytime talk shows to meticulous examinations of our fear of clowns and freaks, excrement and corpses to tirades against the International Monetary Fund, multinational corporations and the Wired digerati…Dery, one of our most astute contemporary cultural critics…relishes his role as curator of America’s bulging cabinet of horrors, carefully selecting an item at a time — a grotesque formaldehyde photograph by Joel-Peter Witkin, the “cometlike white swooshes” on the Nikes worn by the Heaven’s Gate cultists — turning it, poking it and then dressing it up with footnoted snippets of all the most interesting things that have ever been said about it. For all the fun to be had here, though, his warning of the dire consequences we face if we turn our eyes away from what’s before us…comes through loud and clear.” — David Hudson, Salon

Read the raves at Goodreads:

“Mark Dery wrote this book of essays in the late 1990s, about the ‘fin de millennium,’ and it’s still equally relevant as our fractured, kaleidoscopic, socially-networked-to-death decade of naughts draws to a close. The essays explore everything from the Unabomber to killer clowns, placing disturbing 1990s American pop culture in a larger technological and scientific and sociological context. Dery’s description of ‘the nonstop theme-park simulator ride of mass-mediated reality’ hit home with me in a big way. He’s also a witty and thoughtful writer, who’s erudite without getting all wrapped up in labels and academic terminology. Very enjoyable and brain-expanding.”

“I heard Dery interviewed on KPFK in Los Angeles, and wondered if he was as gleefully subversive, jarringly insightful and downright hilarious in print. I wasn’t disappointed! Imagine a brains-sloshing rollercoaster ride where your IQ is ten points higher—rather than lower—when you disembark. That’s what you’re in for.”

Press for The Pyrotechnic Insanitarium: 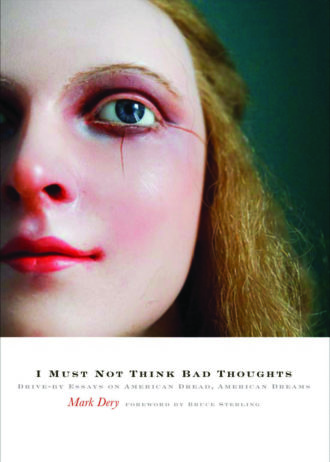 I Must Not Think Bad Thoughts

A drive-by critique of an America gone mad, and a world where chaos and catastrophe are the new normal, by the cultural critic Wired called “provocative and cuttingly humorous.”